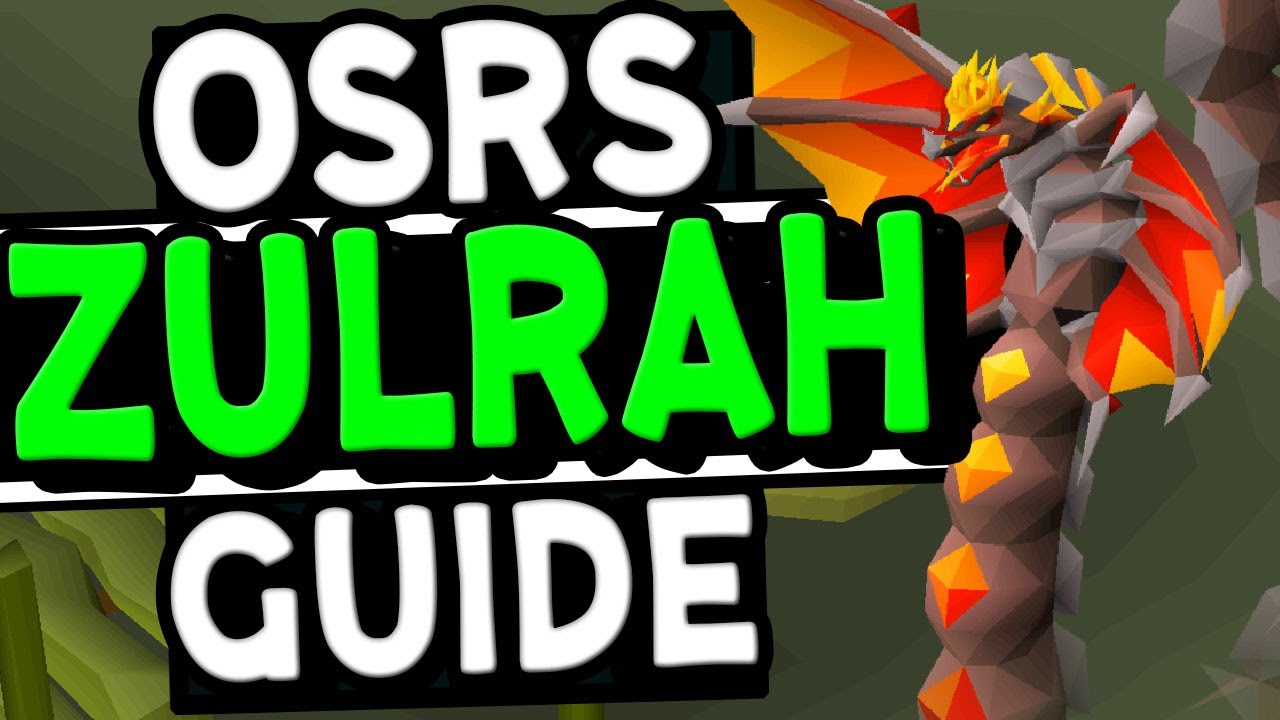 Zulrah is a snake boss, located in Zul-andra, just south of the tyras camp in the elven lands. Whilst seeming daunting to begin with, with a little practise is a very easy and laid back boss with great potential to boost your bank value up by millions. The snake boss with many phases has a wide variety of mechanics, and some great drops - such as alchables, skilling supplies and rare drops such as the toxic blowpipe and the serpentine visage. With the ability to get transmogs for the helmets, and even a pet snakeling, zulrah is a fan favourite for many OSRS bossers.

There are a few quick ways of getting yourself to zulrah quickly. First of all, we have zul-andra teleports. These can be quite pricey, but will speed up the process by atleast 10 minutes per hour. Alternatively, with 76 Agility, you can use the Fairy ring code B-J-S which will take you to a small island right next to the boss area, this agility requirement can be boosted with summer pies.


Talking to the boss

Learning to kill zulrah is a real learning curve. Understand that you will die, and it will be frustrating, but you will 100% see progress in every attempt. Luckily for you, before 30 kills or so you do not need to pay to get your belongings back on death.
Zulrah resides on a small island off zul-andra, in the shape of a horseshoe. In total, there are 4 different rotations that may be thrown your way, some easier than others, but all consisting of the same process. You can work out which rotation you are on by the first moves of the boss, seen in the image on the side, in which you will want to save!

source : https://oldschool.runescape.wiki/images/b/bd/Zulrah_Patterns.png?35593
This image will be your savings grace when learning zulrah. To simplify, The four rotations are the same every time. This means that by identifying which rotation you are on, the pattern will show you where to stand, and what to hit zulrah with. As most bossing, this is a large learning curve, and after 50 kills or so you will automatically know what rotation you are on and what to do for the most part. The best way to learn these is to jump in head first, and try to move with the patterns. You will die alot to begin with as stated earlier, but the more you persevere the better you become. zulrah is often over complicated in guides, but should really be kept simple.

Zulrah is a unique boss in the sense that you can achieve fast kills with very cheap gear. This makes this boss a personal favourite for rebuilding when you’ve hit the sand casino one too many times. In this section we’ll go over some simple setups for the starters and the experienced PVMers.

Cheap setup (Sub 3m)
To begin with, you can choose to simply only use magic to learn the rotations and mechanics. This gear will simply consist of:

Whilst extremely cheap, this setup can be extremely effective during zulrah's range phases, where it is weak to magic.
Alternatively, if you’re ready to test out your hybrid skills, a switch consisting of Black d’hide, amulet of glory, Rune crossbow, Avas device + Diamond bolt (e)’s is super damaging against zulrah’s mage phases. this will take a little getting used to, but will speed up your kills compared to the mage only setup by around 2 minutes per kil, averaging around 3-4 minute kills.

Low cost setup (sub 10m)
Once you’ve made a little profit and have some spare cash in the bank, its time to upgrade. Get your hands on:
This will increase your magic accuracy and damage by a considerable amount! The speed of the kills will instantly be upgraded by around 1 minute - 2 minutes per kill, allowing for multiple extra kills/hour. To accompany this gear setup, you may also wish to upgrade to

Med setup (Sub 20m)
So you’ve upgraded your gear to the toxic weapon set, and have made even more money. You’re probably wondering what the next upgrade may be and it may surprise you. Once you have the funds, get your hands on


It's recommended you use NMZ points to upgrade this ring to double the defence bonuses, but it's the special ability you’re buying this for. The ring of suffering has the ability to store recoil rings + activate it, meaning your recoil will never run out for snakelings + zulrah’s high damage, whilst also giving a very large defence bonus overall. This is an essential quality of life upgrade, which also allows for extra invent space.

High cost setup (Sub 100m)
The bank is looking bigger and its time for an upgrade. At around the 100m bank value, the best gear you can use will consist of -

This gear setup whilst a little more expensive, will see you rack up kills in sub 3 minutes every time. The high DPS from the trident + mage gear and blowpipe will be substantially better than the cheaper setups. Whilst being more expensive, you will make a lot more GP/hour with the multiple extra kills received per hour. At this point, it is recommended you use Zul-andra teleports. These allow for 3 extra kills per hour, meaning all scrolls used are paid for by the extra kills


From here on, your upgrades simply consist of:

Tbow rebuild (Sub 1b)
Zulrah is the perfect boss for rebuilding after buying your first twisted bow. The gear requirements are next to nothing, as the twisted bow is so powerful against zulrah you can literally just use full black d’hide. this gear setup consists of:

The twisted bow is so powerful that it negates any need to use a trident. You can potentially see kills that take less than a minute in armour less than 1m gold. Not to mention, it is much easier to kill the boss when there is no switching required.

Absolute max gear (2b+)
If you are looking to make alot of extra gold, whilst having billions in the bank, or looking to get the zulrah pet, this setup is for you. This consists of:

This setup will be allowing you to get sub 1 minute kills every time, with my personal record being 38 seconds. in this setup. The DPS by the harmonised orb is non comparable, the pure strength you will use against the boss is no match for a 500hp snake. This method will see the best kills/hour possible making upwards of 3m/hour.
Back to Blog